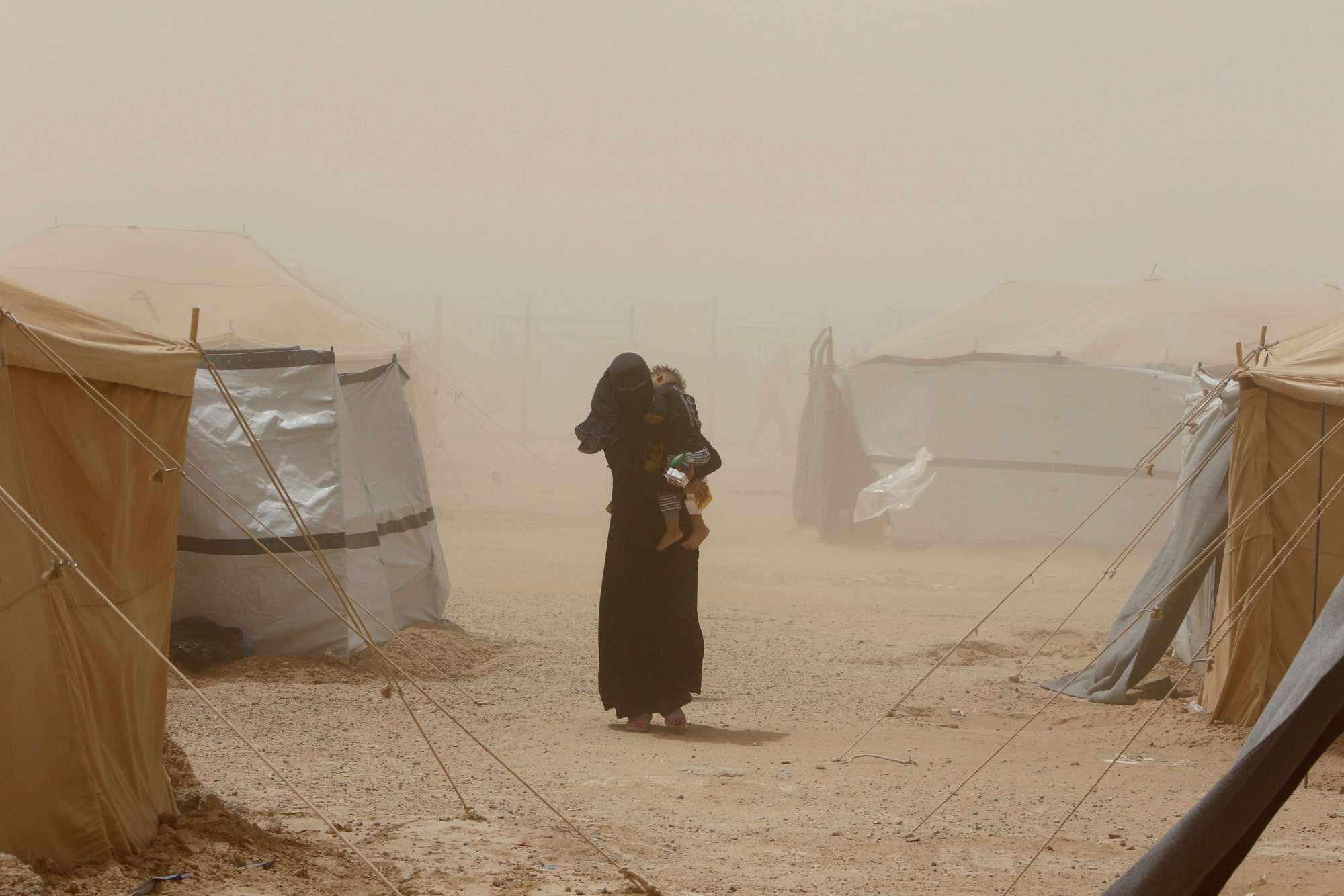 [file] A woman carries her child during a dust storm at a refugee camp in Ameriyat Falluja, south of Falluja, Iraq (REUTERS/Ahmed Saad)
21 Jul 2022 Iraq
Share On Copied
AR

Geneva - About 1.2 million displaced people in Iraq are living in dire humanitarian conditions in light of the high temperature and the recurrence of dust storms in the summer, Euro-Med Monitor said in a statement expressing grave concern.

Of particular concern is the ongoing official policy of negligence towards the suffering of the displaced Iraqis still living in the camps. The Iraqi government has not made any pivotal steps to end their suffering and return them to their homes, which they were forced to leave during the armed conflict between the Iraqi forces and ISIL (2014 – 2017).

The suffering of the displaced doubles during the summer, as displacement camps lack the infrastructure necessary to protect against high temperatures amid long power cuts of up to 17 hours per day, causing a large number of the displaced to experience frequent cases of fatigue. Asthma patients, in particular, suffer severe complications due to inhaling hot and polluted air for long periods. The high temperatures also cause the outbreak of big fires in several camps.

During the high temperatures, the displaced suffer from the spread of dangerous insects and reptiles, especially snakes and scorpions. Some of the displaced told the Euro-Med Monitor team that the authorities had not provided the camps with the necessary pesticides for over three years, which led to an increase in scorpion stings and snake bites, as well as the outbreak of skin diseases.

The camps have poor healthcare services, such as simple health centres with insufficient medical supplies and medicines run by nurses only. This pushes the patients to resort to treatment in private hospitals or clinics, thus bearing additional financial burdens they are often unable to provide due to the lack of income sources and their inability to obtain jobs because of their complicated situation.

Three displaced people (two men and a woman) residing in camps in the Kurdistan region of Iraq, who all preferred not to reveal their names, told the Euro-Med Monitor team about the high temperatures’ impact on their lives in the camps, and the poor government services provided to them.

A displaced person told the Euro-Med Monitor team: “Insects, scorpions, and snakes are a great and constant concern for us in light of the hot weather and the lack of efforts to combat them. Moreover, the tents we live in are worn out and have not been changed for six years. High temperatures double the suffering of the patients, especially the elderly, and we receive almost no good health services. I really wonder if any government official can live in such a situation even for only half an hour.”

On the outbreak of skin disease, another displaced person told the Euro-Med Monitor team: “In light of the blazing hot weather, we noticed a widespread outbreak of skin diseases that we do not know much about due to the poor medical services in the camp. We are forced to go to a private doctor, who charges a very high price for the check-up. It is too expensive for our limited financial capabilities, as we are also unable to secure the price of the medicine.”

There are currently 14 official displacement camps in Iraq; ten are in the Kurdistan region of Iraq and four in the Al Anbar Governorate. There are other random camps whose residents have not yet been allowed to return to their homes due to several reasons, most notably, the unstable security situation and the possibility of the presence of wanted displaced persons.

In most camps, rickety tents do not protect residents from the sun, and the displaced often have to put wet towels on their heads in an attempt to reduce their body temperature.

Due to the permanent shortage of cooking gas and fuel, the displaced resort to making simple clay ovens for cooking, which leads to an additional rise in temperature and emits harmful substances that can affect their health.

A displaced woman told the Euro-Med Monitor team: “We do not have any means to cool the air or preserve food. Due to the lack of fuel, I have to use a clay oven to bake bread, and I can only ignite pieces of cloth and damaged shoes. The smell of the burning materials causes great harm to us, but we do not have a better choice.”

Legal researcher at Euro-Med Monitor, Omar Al-Ajlouni, stressed that “the Iraqi authorities are obligated to equip the displacement camps with all the necessary means to cope with the expected heat waves in order to preserve their health and safety and avoid any damage or accidents caused by high temperatures.”

The Iraqi constitution obligates the state to provide adequate housing and a decent livelihood, as it stipulates in Article 30/1 that: “The State shall guarantee to the individual and the family - especially children and women – social and health security, the basic requirements for living a free and decent life, and shall secure for them suitable income and appropriate housing.”

Euro-Med Monitor calls on the Iraqi government to quickly address the issues experienced by the displaced in the camps, especially the high-temperature, work to provide a decent and safe life for the displaced, and accelerate efforts to return them to the areas from which they were forced to leave because of the war.