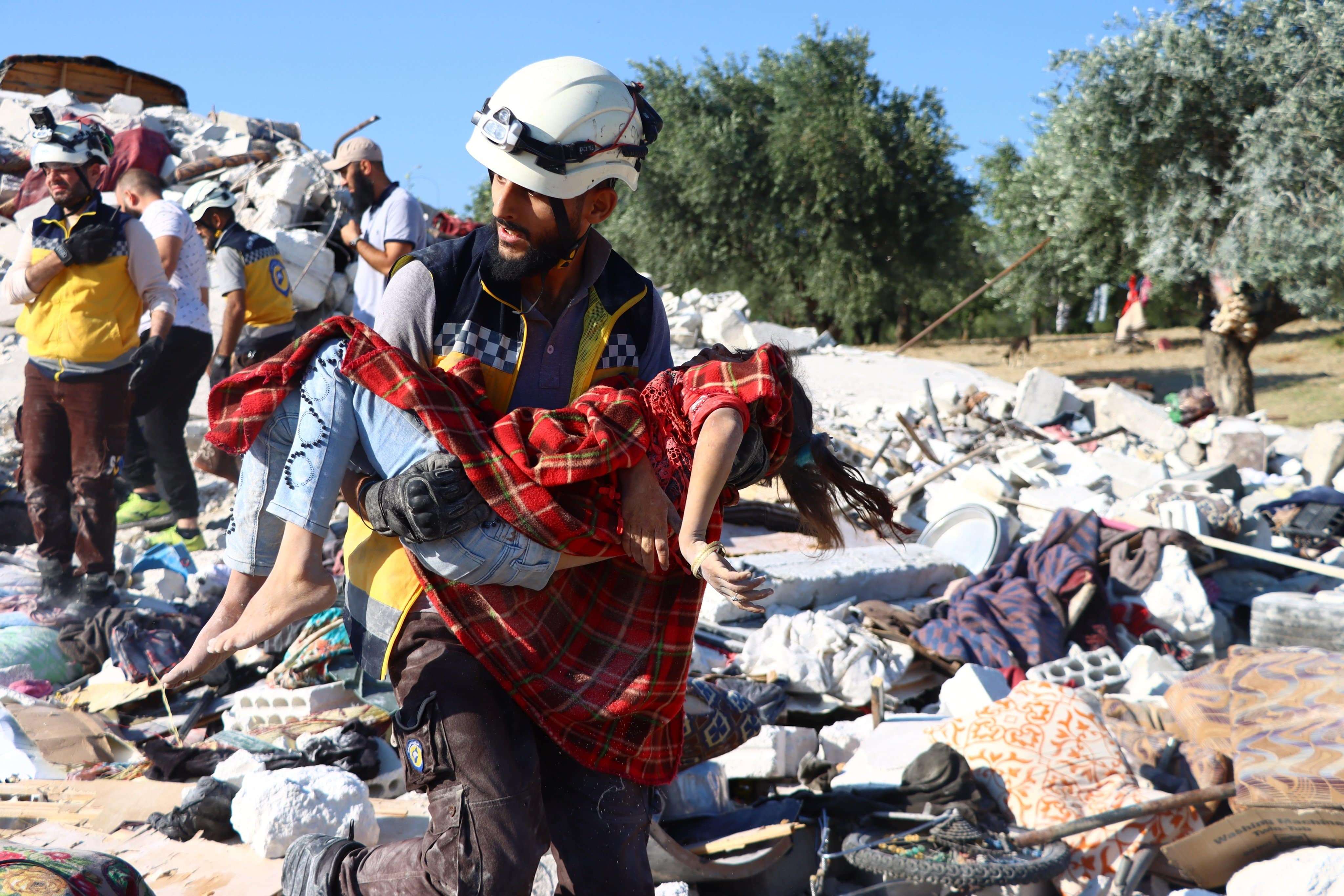 A member of the Syrian Civil Defense (or the White Helmets) carries a girl after she was pulled from under the rubble of a destroyed house in the village of Al-Jadida in Idlib countryside, Syria. (Twitter)
22 Jul 2022 Syria
Share On Copied
AR

Geneva - The International community, led by the United Nations and its relevant bodies, must take urgent measures to ensure the protection of civilians in northwest Syria from the indiscriminate airstrikes by Russian warplanes, Euro-Med Human Rights Monitor said in a statement.

Russian warplanes recently launched several missiles at residential communities in the villages of Al-Jadida and Al-Yacoubiyah in Idlib Governorate, northwest Syria, which led to the death of seven civilians, including four young siblings.

On Friday morning, 22 July, local sources documented a Russian warplane bombing Al-Jadida and Al-Yacoubiyah, in Idlib’s western countryside. According to the Syrian Civil Defense (or the White Helmets), the airstrikes on Al-Jadida resulted in the killing of seven civilians, including five children—four of whom were siblings­—and the injury of 13 others. The majority of victims are from one family.

Euro-Med Monitor reviewed photos and clips published by local activists in the aftermath of the incident. The bombing destroyed at least one residential house, from under the rubble of which the bodies of the children were pulled out, looking pale and showing signs of premortem death anxiety. Local sources confirmed that the child victims were siblings, and counted their parents among the injured.

The act may amount to a war crime, as the planes appeared to randomly target densely populated residential neighbourhoods inhabited by displaced people from the countryside of Hama Governorate. The incident is yet another piece of evidence of the abuse of civilians in the armed conflict; many lives could have been saved if the UN and international actors decided to activate the principle of accountability for crimes committed against Syrian civilians.

Since the beginning of this year, Syrian forces and their allies have carried out many aerial and ground attacks on northwestern Syria that have targeted densely populated areas, including residential buildings and service facilities, and have resulted in dozens of deaths and hundreds of injuries. Achieving justice for Syrian victims is still very possible, but requires international will and putting aside all differences that would likely prevent some parties from respecting human values and holding perpetrators accountable.

The bombing of civilian areas constitutes a clear violation of the rights of protected groups in armed conflicts, as international humanitarian law absolutely prohibits targeting civilians. According to Article 38 of the International Convention on the Rights of the Child, “States Parties shall take all feasible measures to ensure protection and care of children who are affected by an armed conflict”.

The international community and relevant UN institutions can bring about real change by modifying their handling of human rights violations in Syria—going beyond condemnation towards launching serious and organized efforts to hold accountable those responsible for possible war crimes, and imposing strict sanctions targeting the Syrian regime's ability to continue its inhumane practices.

Euro-Med Monitor calls for much stronger efforts to hold perpetrators of violations in Syria accountable, through adherence to the principle of universal jurisdiction adopted by national courts in Europe, and the filing of lawsuits before these courts against those suspected of participating in the assault on the lives of Syrian civilians or causing them suffering in any way.