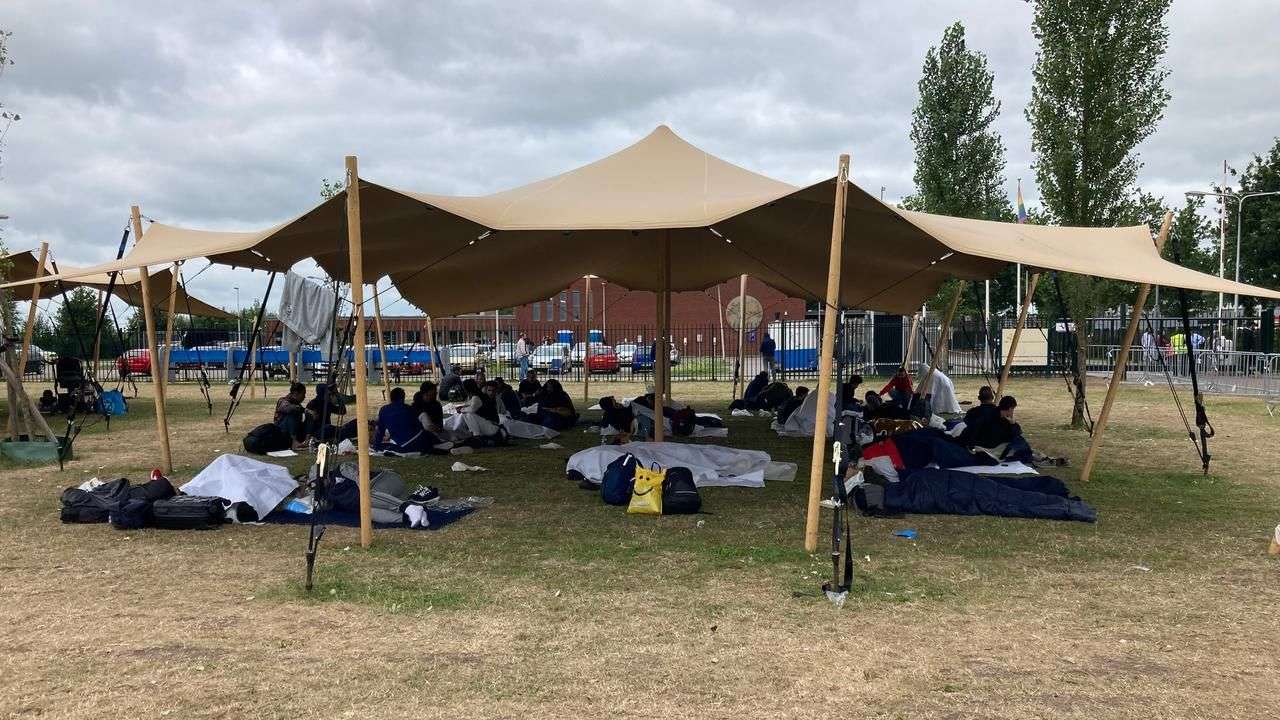 A group of asylum seekers sleep in the open in the village of Ter Apel in the Netherlands. (Netherlands Posts English)
25 Jul 2022 Europe
Share On Copied
AR

Geneva - On Friday, Euro-Med Monitor sent an urgent letter to Eric van der Burg, the Minister for Migration of the Kingdom of the Netherlands, concerning the over-crowdedness of temporary asylum accommodation centres and delays in processing asylum claims. The two issues combined have resulted in many asylum seekers sleeping rough in the open, some for weeks.

“In addition to the lack of temporary accommodation, we have received testimonies from asylum seekers who indicated that the Central Agency for the Reception of Asylum Seekers (COA) has delayed starting the procedures for their asylum applications, which contributes to this unsustainable outcome of leaving many individuals stranded in the open,” the letter read.

Euro-Med Monitor’s letter added that some asylum seekers, who have been sleeping in the open, further indicated receiving only one meal a day consisting of meagre portions insufficient to adequately nourish them.

“Such situations where lack of accommodation is compounded by long delays in processing asylum applications are highly concerning for the well-being and mental and physical health of asylum seekers, especially in light of the scorching wave of heat the Netherlands has been experiencing in the past week,” Dr Ramy Abdu, Euro-Med Chairman wrote to the minister.

The letter urged Van der Burg to review this dire situation and “urgently undertake necessary measures to ensure the provision of adequate shelter, food, health care and other basic necessities to asylum seekers, as well as to reduce the over-crowdedness of migrant camps; to increase staffing; and to reduce delays in the processing of asylum applications.”

On a related note, Euro-Med Monitor strongly criticized the Cabinet of the Netherlands’ approval of the plan to house asylum seekers on cruise ships, claiming to address the problem of over-crowdedness in temporary accommodation centres.

In addition to being inhumane, the plan reveals a new aspect of discrimination adopted by the Dutch government in dealing with refugees and asylum seekers, as it excludes Ukrainian refugees from staying on ships.

In addition to the possible restriction of their right to freedom of movement, housing asylum seekers fleeing wars and conflicts on cruise ships may cause them psychological complications. Some of the asylum seekers almost lost their lives during their asylum journey across the sea, while others have indeed lost their relatives or friends; these experiences make asylum seekers’ stay in the sea destabilizing for their psychological state.

The Dutch government should reverse its plan to accommodate asylum seekers on cruise ships, work to manage and address the over-crowdedness of accommodation centres in a manner that respects the rights and dignity of refugees, and expedite the processing of asylum applications without arbitrariness or violation of the relevant laws.