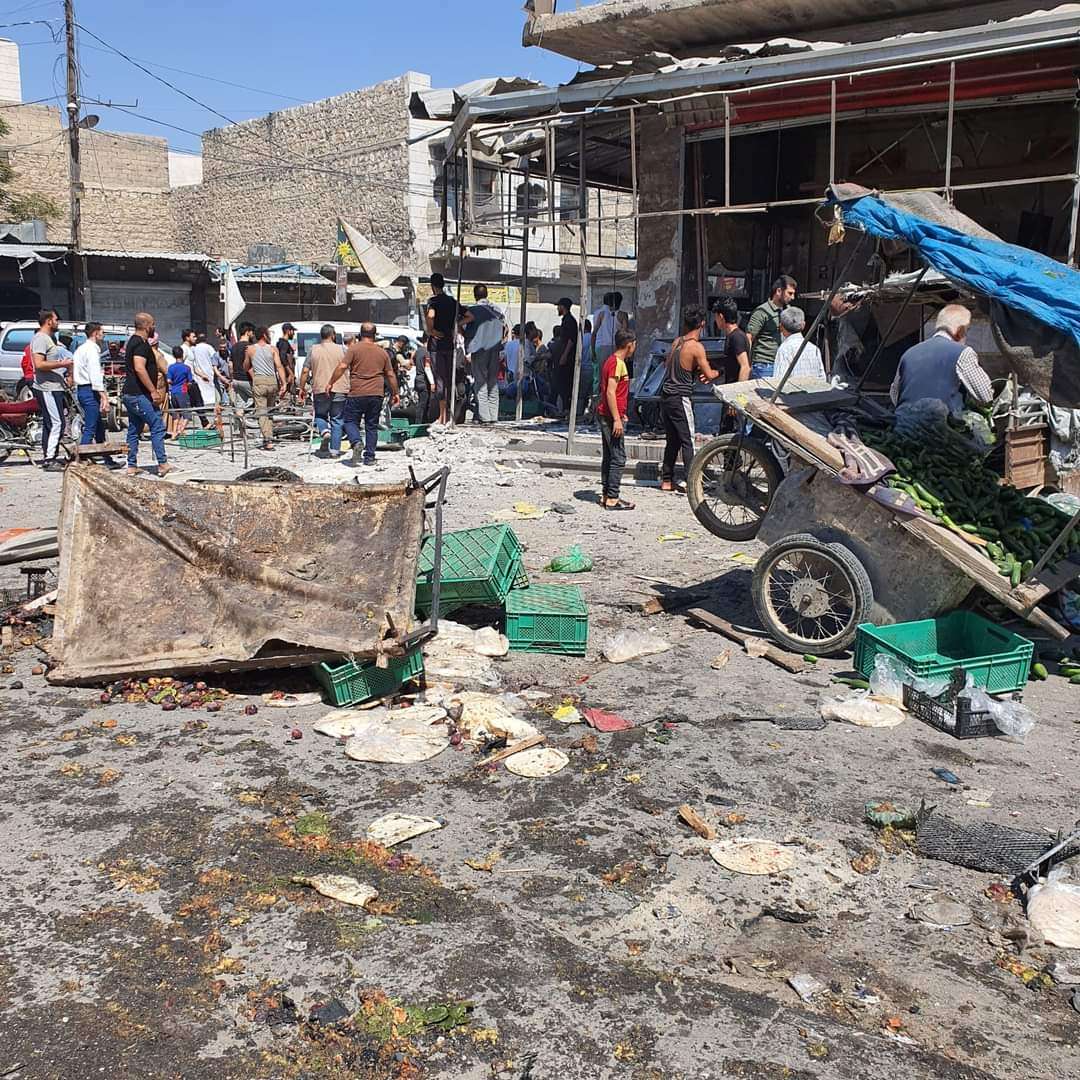 The aftermath of a missile attack on the Souq al-Hal market in the northern Syrian city of Al-Bab. (Twitter)
19 Aug 2022 Syria
Share On Copied
AR

Geneva - An immediate independent investigation must be launched into the Friday morning missile shelling on the city of al-Bab in the eastern countryside of Aleppo, northern Syria, Euro-Med Monitor said in a statement. The shelling resulted in the death or injury of about 50 civilians.

At approximately 11:00 a.m., at least five missiles targeted several civilian sites in the city of al-Bab, most notably the old Souq al-Hal market, which is usually crowded with shoppers at such a time. The attack killed 15 civilians, including five children, and injured over 35 others.

Euro-Med Monitor reviewed the horrific images posted on social media by local activists depicting the effects of the shelling. Shrapnel from the missiles mutilated the bodies of those now dead or injured, damaged multiple shops and a nearby school, and destroyed several carts.

The city of al-Bab is controlled by the armed Syrian opposition. It is close to areas controlled by Syrian regime forces and additional areas controlled by the Syrian Democratic Forces (SDF) in the country’s north, from which the missiles were reportedly launched. Euro-Med Monitor was unable to confirm the veracity of the reports. Following the incident, the SDF issued a statement denying responsibility for the shelling and claiming no direct or indirect involvement.

Several bombings, missile strikes, and assassinations have occurred in al-Bab in recent months, killing many civilians, as well as militants affiliated with the so-called Syrian National Army (SNA), which controls the city with Turkish support.

Anas Jerjawi, Euro-Med Monitor’s Chief Operations Officer, said: “This horrifying incident serves as yet another reminder that there is no safe zone in Syria, and it demonstrates the frailty of the agreements designed to protect those areas from military attacks.”

“Although the perpetrator of the shelling remains unknown, the Syrian regime forces’ and the SDF’s documented pattern of targeting civilian areas indiscriminately likely makes them responsible for the incident, which calls for an immediate independent investigation to identify and hold the perpetrators accountable”, Jerjawi added.

The incident emphasizes the critical need for immediate action to protect civilians in northern Syria from indiscriminate and organised attacks carried out by all parties to the conflict. Targeting civilian areas is a clear violation of the rights of protected persons in armed conflicts, as international humanitarian law expressly prohibits targeting civilians and civilian objects and requires them to be excluded from all military operations.

In addition, the incident is further evidence of the high cost of the international community’s continued disregard for human rights violations in Syria, as many lives could have been saved had international actors demonstrated a genuine willingness to implement the principle of accountability for crimes committed against Syrian civilians.

Syrian forces and their allies have carried out dozens of aerial and ground attacks on north-western Syria since the beginning of this year, targeting residential buildings and service facilities, and resulting in dozens of deaths and hundreds of injuries.

The international community and relevant UN institutions can affect real change in Syria by shifting their approach to human rights violations, moving beyond condemnation and toward serious and organised efforts to hold those responsible for possible war crimes accountable, such as imposing strict sanctions aimed at limiting the ability of rights violators to continue their unlawful actions.

Euro-Med Monitor calls for much stronger efforts to hold perpetrators of violations in Syria accountable, through adherence to the principle of universal jurisdiction adopted by Europe’s national courts, and the filing of lawsuits before these courts against suspected participants in the assault on the lives of Syrian civilians.