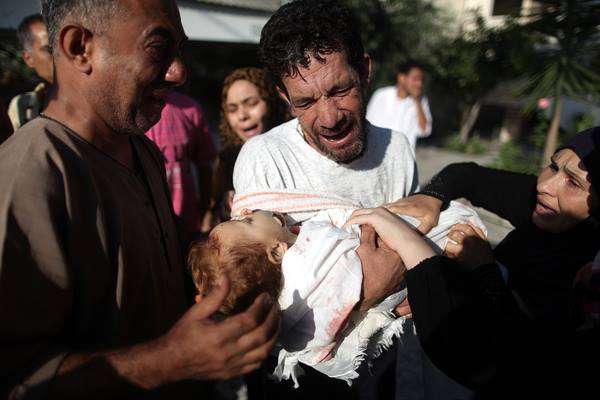 Geneva-Gaza City, Occupied Palestinian Territories– Only three days after the Gaza suburbof Shijaeyah was almost flattened by Israeli tanks and air strikes, causing at least 80 deaths, another village to the south – Khuaz’a – now is under a similar massive assault, reports Euro-Med Monitor for Human Rights.

At least 25 residents already have been killed, and 60 percent of the population has fled, packing the roads and houses of friends and relatives. The aggression is continuing at this time. “It’s another humanitarian catastrophe,” says Ramadan Rezeq, a policy officer at the Euro-Mid. “The international community must act urgently to stop the slaughter and end the blockade that has empowered Israel to act as oppressor and executioner.”

Khuaz’a is located to the east of Khan Younis, the point closest in Gaza to the Israeli border. Most of the estimated 11,000 residents are vegetable farmers. Yet on the early morning of Wed., July 23, Israeli forces surrounded the village by land, sea and air, then moved in. Eyewitnesses reported to Euro-Mid that Israeli snipers are scaling the roofs of houses and shooting at “anything that moves” – including women and children trying to escape. To date, it is estimated that more than 25 residents have been killed, and at least 16 are wounded, with ambulances prevented from entering the town.

The International Committee of the Red Cross has been unable to negotiate a temporary truce to allow retrieval of the dead and wounded. Meanwhile, more than two-thirds of the houses have been destroyed, and the Israeli army has commandeered many others. “If the Israeli forces are not stopped now, the entire international community will have blood on its hands, “ says Mira Bishara, a Legal officer at the Euro-Mid.

The Euro-Med Monitor for Human Rights’ headquarters is based in Geneva, Switzerland, with regional offices in the Middle-East.

Statistics of the Sixteen day of the Israeli Offensive on Gaza