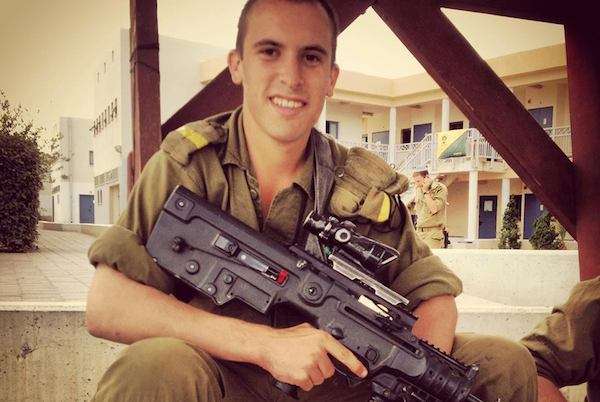 Max Steinberg, a “lone soldier” from Los Angeles who was killed in Gaza on July 20.
28 Jul 2014 Israel-Palestinian Territory
Share On Copied

U.S. and European governments express alarm about what they say is a growing number of their citizens traveling to Syria to join extremist militants in the fight to topple Bashar al-Assad. In the United States, the FBI has formed a special team to identify citizens traveling to Syria to fight anti-government groups, and is working with both intelligence and law enforcement agencies to investigate them. And in the United Kingdom, the queen gave a speech last month in which she highlighted a new law that allows the government to prosecute British citizens who travel overseas to “train for acts of terrorism against any government.”

Yet, a steady trickle of such foreign recruits are feeding the Israeli military, which has killed 1,027 Palestinians in Gaza as of this writing, of whom an estimated 81 percent were civilians and 236 were children. Fifty-two entire families – ranging from four to 21 members – have been literally wiped out. More than 200,000 residents have been forced out of their homes and among the damaged buildings are 120 schools and 18 health care centers. The UN’s top human rights official, Navi Pillay, says, “There seems to be a strong possibility that international law has been violated, in a manner that could amount to war crimes.”

Israeli officials themselves estimate that 2,500-5,000 soldiers currently serving in the army are what are called “lone soldiers” – Jews who come to Israel to serve in the military despite having grown up elsewhere and having no immediate family members in the country. More than 80 percent of them specifically choose combat duty.  During the current assault on Gaza, two of those lone soldiers, both Americans, were among the 43 Israeli soldiers killed to date during the 21-day operation.

“Often, we choose the most elite (read: dangerous) units, like the Golani Infantry Brigade,” explains Joel Chasnoff, an American who joined as a lone solider in 1997. Mikey Hartman, another American lone soldier who went on to found the Israeli military’s Marksmanship and Shooting School, says he “wanted to be a hero” – which he defined as being a sniper. Indeed, according to a report in the Jewish Journal, lone soldiers are regarded as “a kind of star” in Israel (sort of like the acclaim fellow militants gave the “American suicide bomber” in Syria).  In Joel Chasnoff’s praise of lone soldiers, he says this about Israeli culture: “Israelis do not apologize. Ever. Because to apologize is to admit you’re vulnerable.” Is this a value system parents want their children to adopt?

To smooth the way for youthful citizens of other countries (under 24 for males and younger than 21 for females) to fight in its forces, the Israeli military offers three programs: 1) Marva, an “army simulation program,” is operated in partnership with the Jewish Agency for Israel. The website for the Israeli Defense Forces, describes it like an adventure park/summer camp:  “After eight weeks in this immersive army program, serving alongside fellow Jewish youth from countries around the world, you’ll know more about the inner workings of the IDF than you ever dreamed, and you’ll have experienced it firsthand.” 2) Mahal, an enlistment program, provides step-by-step support when becoming a lone soldier. 3) The Lone Soldier Center in Tel Aviv, a relatively new addition, offers everything from host families to “fun days.”

An additional number of foreigners – about 4,000 in 2012, from 58 countries — sign on as non-combat volunteers with the Israeli army through an international program with 26 recruiting centers around the world called Sar-El (“service for Israel” in Hebrew).  Unlike lone soldiers, Sar-El volunteers can be Christian or Jewish. The largest numbers of recruits come from the United States (1,221 in 2012), followed by France (1,086). However, while these volunteers do not engage in direct combat, they wear army uniforms and are stationed on military bases.  In its 2014 work plan, General Kobe Barak, head of the Israeli military’s technological and logistics directorate, called for an 8 percent increase in the number of Sar-El volunteers annually for the next three years.

Although lone soldiers and volunteer army aides are not mercenaries in the sense that they receive significant compensation, or are motivated for reasons of personal gain, the recruitment of foreigners by Israel to fight in a colonial assault against an occupied people is clearly a practice that violates the spirit of international law. UN Resolution 3103 states that “the use of mercenaries by colonial and racist régimes against national liberation movements struggling for their freedom and independence from the yoke of colonialism and alien domination is considered to be a criminal act and the mercenaries should accordingly be punished as criminals.”

Likewise, article 5 of the UN General Assembly’s resolution 44/34 declares that

“states shall not recruit, use, finance or train mercenaries for the purpose of opposing the legitimate exercise of the inalienable right of peoples to self-determination…”

As UN human rights chief Navi Pillay suggests, Israel is guilty of war crimes. Anyone who travels to join them, as international law lays out, are criminals as well. Just as they are concerned about feeing the bloody conflict in Syria, the governments of the countries where recruitment centers operate and from which “lone soldiers” are traveling should end their complicity now.