6 massacres in one day, one of which in an UNRWA school, while Israel is trying to isolate Gaza from the world 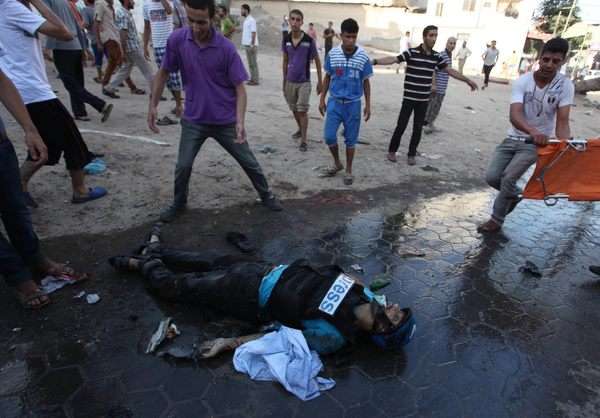 Gaza City, Occupied Palestinian Territories– Before the sunset of the 23rd day of the Israeli assault on the besieged Gaza Strip, the Israeli army has committed six massacres against civilians. The most horrific and atrocious massacre was committed at dawn in UNRWA-run Abu Hussein School in ​​Jabalia refugee camp in the northern part of Gaza Strip, killing 15 Palestinians, most of them were children, and wounding 90 others when five artillery shells landed directly on one of the classrooms as displaced people were asleep. The school, which shelters 3,300 refugees, is the sixth UNRWA-run school that has been targeted directly by the Israeli forces.

The Euro-Mediterranean Human Rights Monitor stresses that this massacre has been preceded and followed by other massacres against the families of Al Khalili, Abu Amer, Dhaheer and al-Astal. Seven members of Khalili family from Tuffah neighbourhood in Gaza City, including three children and two women, were killed when their house was bombed and hit directly without any prior warning. Seven members of Abu Amer family from Khan Younis, which has been heavily bombed by the Israeli army, were also killed. Moreover, 10 members of al-Astal family, including one child, were killed at dawn in an F16 airstrike without warning as they were asleep in the family's gathering room of their house east of Khan Younis, and 25 others were also injured in the same incident.

The
Euro-Med Monitor reveals that the last massacre took place during the "humanitarian truce" that was announced by the Israeli army, when a popular market in Shujaeya neighbourhood in eastern Gaza city was attacked this evening, killing 17 Palestinians, including a journalist and two civil defence workers, brining the number of paramedics murdered by the Israeli army since the beginning of the Israeli assault to seven. Another 200 people were also injured, with some of them losing their limps. The residents were still discovering the horrific scenes of the massacre committed earlier in the neighbourhood by the Israeli army, which killed 70 people, mostly children and women and injured dozens.

The Euro-Med Monitor  also confirms that civil defence personnel and journalists came under Israeli shelling while trying to approach the location of the massacre.

The Euro-Med Monitor is expressing concerns over the Israeli army's attempt to find a cover for the massacres by targeting vital infrastructures linking the Gaza Strip to the outside world. The Israeli army bombed several crucial installations, most notably Gaza's only power plant, in addition to other generators and water pumps. Officials said that repairing the plant that provides two-thirds of Gaza's power needs may take a full year to complete.

Due to the severe damage caused to the terrestrial and cellular communications and internet infrastructure, the Palestinian Telecommunication Group (PalTel) announced that a large part of its landline and cellular network and internet services have been interrupted and disrupted as a result of the destruction of the power plant as well as shortage of fuel supplying the networks with the energy needed to operate.

85% of the cellular communications network – Jawwal in the Gaza Strip has been also disrupted, and the network may fully stop functioning within 72 hours at the latest.

Euro-Mediterranean Human Rights Monitor has issued preliminary statistics for the outcome of the Israeli attack on the besieged Gaza Strip as of midnight of the 23rd day of the Israeli offensive. The number of people killed Wednesday is 143, including 37 children, and 18 women, bringing the total number of deaths to 1,360 people, including 317 children and 176 women.

In this context, the Euro-Med Monitor said that the Israeli armed forces have stepped up their targeting of Palestinian civilians in recent days, without taking the necessary precautions to avoid targeting them. Furthermore, there are about 56 Palestinian families that have been targeted, with most of its members losing their lives since the beginning of the Israeli assault on the Gaza Strip. The number of people from the same families killed in such attacks is nearly 250, which is considered "a full-fledged war crime" by the Euro-Med Monitor.

Due to the heavy bombardment of the Gaza Strip, which has intensified significantly in recent days, 645 were injured today, including 219 children and 67 women, bringing the number of people wounded since the beginning of the assault to 7,615; including 2,429 children and 1,560 women.

Places of worship have been also targeted. With the ongoing offensive, the Israeli forces have been deliberately targeting mosques. According to the Euro-Med Monitor, the Israeli warplanes targeted on Wednesday 11 mosques, five of which were completely destroyed, and the other seven were partially damaged. This brings the number of mosques targeted since the beginning of the offensive to 93 mosques, 26 of which were destroyed completely. In addition to that, the Israeli army targeted and partially destroyed the outpatient clinics at Shifa Hospital; Gaza's main hospital that receives most of the victims, bringing the number of hospitals targeted since the beginning of the aggression to 16.

Since the beginning of the assault on Gaza, the Israeli forces have attacked more than 8 water and sanitation stations providing services to more than 700,000 civilians. In addition to that, 147 schools have been damaged as a result of the Israeli assault.

The Israeli aggression has caused big losses to the various aspects of the economic sector, which was already suffering as a result of the siege imposed on the Gaza Strip for eight years. The Observatory has documented the full destroy of 243 commercial and industrial stores, causing economic losses to the Palestinians estimated at $880m, including $640m in direct losses.

The Euro-Mid confirms that thousands of Palestinians have been forced to flee their houses due to the ongoing and the random Israeli artillery shelling of the border areas. As of Wednesday evening, more than 214,000 people have been displaced within the besieged Gaza Strip; some of whom have been displaced as a result of their houses being bombed and blown up by Israeli airstrikes. Nearly half of them fled to dozens of schools run by UNRWA, which have not be much safer either, as one of the schools was targeted directly and the incident led to the killing of 15 people and wounding more than 200. Since the beginning of the ground operation, the Gaza Strip has been under heavy and random attacks by jet fighters, naval warships, and artillery shells targeting civilian houses in particular.

The Euro-Med Monitor for Human Rights’ headquarters is based in Geneva, Switzerland, with regional offices in the Middle-East.