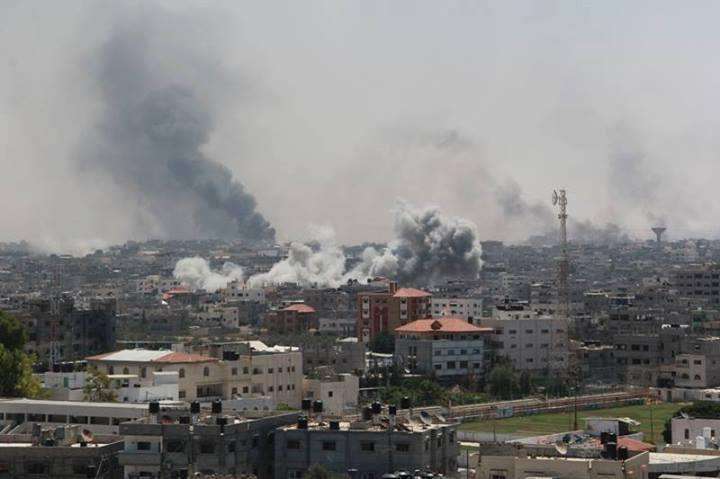 Gaza City, Occupied Palestinian Territories- With the ongoing Israeli assault on the besieged Gaza Strip in its 24th day, it is much clear today than ever that the Israeli army is deliberately seeking to achieve not only short-term goals, but also long-term goals by destroying the foundations of the future life in Gaza.

The Euro-Med Monitor for Human Rights documented the Israeli forces' premeditated targeting of a number of vital factories and economic installations, which had been partially contributing to facilitating the daily life of the people of Gaza, who have been besieged for eight years and already facing certain obstacles, including high unemployment rates and the Palestinian government's failure to pay the salaries on a regular basis.

The Israeli aggression has caused significant losses to the various aspects of the economy, which was already suffering mainly due to the eight year blockade. According to the Euro-Med Monitor, 243 commercial and industrial facilities have been fully destroyed, causing substantial economic losses, and brining the total direct losses caused by the Israeli offensive to more than 1.1 billion dollars.

The grave economic situation is not limited to the disruption of work in factories, as well as in the employees' salaries and high unemployment rates. Its graveness also increases the significant impact inflicted by the fuel shortage at all walks of life, since fuel is required to operate many of the necessary facilities. Bakeries for example are facing the risk of work stoppage amidst fuel shortage and electricity outages, which causes a real crisis that is starting to emerge. This morning, dozens of people lined up in front of bakeries under the heavy and indiscriminate bombardment, risking their lives to buy bread. At the same time, it is expected that such bakeries will run out of bread at any time, especially following the damage caused to the power plant. Thus, residents of Gaza city have access to electricity for about two hours every three days, whereas those in the central area of the Gaza Strip have no access to electricity at all.

Add to this the substantial financial losses caused by the Israeli attacks on civilian homes, flattening hundreds of them. The losses of homes destroyed completely are estimated at 231 million dollars, and those destroyed partially at 154 million dollars, in addition to the damage losses of thousands of other homes.

Furthermore, 29 health facilities were targeted, causing damage to some, while others had to be shut down. 13 hospitals were targeted; three of which were shut down and the rest were significantly damaged. Seven primary health care centres were also targeted, in addition to nine ambulances targeted directly.

The Euro-Med Monitor is expressing concerns over the Israeli army's attempt to find a cover for its massacres by targeting vital infrastructures linking the Gaza Strip to the outside world. Due to the severe damage caused to the terrestrial and cellular communications and internet infrastructure, the Palestinian Telecommunication Group (PalTel) has announced that a large part of its landline and cellular networks and internet services have been interrupted and disrupted as a result of the destruction of Gaza's power plant and fuel shortage. Also, 85% of the cellular communications network – Jawwal in the Gaza Strip has been also disrupted, and the network may fully stop functioning within 48 hours at the latest.

Euro-Med Monitor for Human Rights has issued preliminary statistics for the outcome of the Israeli assault on the besieged Gaza Strip as of midnight of the 24th day of the Israeli offensive. The number of people killed Thursday is 80 people, including 12 children, and 18 women, bringing the total number of deaths to 1,4400 people, including 321 children and 181 women.

In addition to that, places of worship have been also targeted. With the ongoing offensive, the Israeli forces have been deliberately targeting mosques. According to the Euro-Med Monitor, the Israeli warplanes on Thursday targeted nine mosques, four of which were completely destroyed, and the rest were partially damaged. This brings the number of mosques that have been targeted since the beginning of the offensive to 102 mosques, 30 of which were destroyed completely. Moreover, the Israeli army targeted and partially destroyed three hospitals, bringing the number of hospitals targeted since the beginning of the aggression to 21.

UNRWA facilities have not been spared by the Israeli attacks either. On Thursday morning, the Israeli army bombed Al Maghazi Girls School run by UNRWA in the central district of the Gaza Strip, bringing the number of schools targeted directly to 7, and the number of UNRWA's facilities affected to 100.

Since the beginning of the assault on Gaza, the Israeli forces have targeted more than eight water and sanitation stations providing services to more than 700,000 civilians. In addition to that, 147 schools have been damaged as a result of the Israeli assault.

The Euro-Med Monitor confirms that thousands of Palestinians have been forced to flee their houses due to the ongoing and the indiscriminate Israeli artillery shelling of the border areas. As of Thursday evening, more than 247,000 people have been displaced as a result of their houses being bombed and blown up by Israeli airstrikes. Nearly half of them fled to dozens of schools run by UNRWA, which have not bee much safer either, as two UNRWA schools were targeted directly, leading to the death and the injury of dozens. Since the beginning of the ground operation, the Gaza Strip has been under heavy and random attacks by jet fighters, naval warships, and artillery shells that target civilian houses in particular.

The Euro-Mediterranean Human Rights Monitor’ headquarters is based in Geneva, Switzerland, with regional offices in the Middle-East.
Info-graphic: Statistics of the 24 days of the Israeli Offensive on Gaza