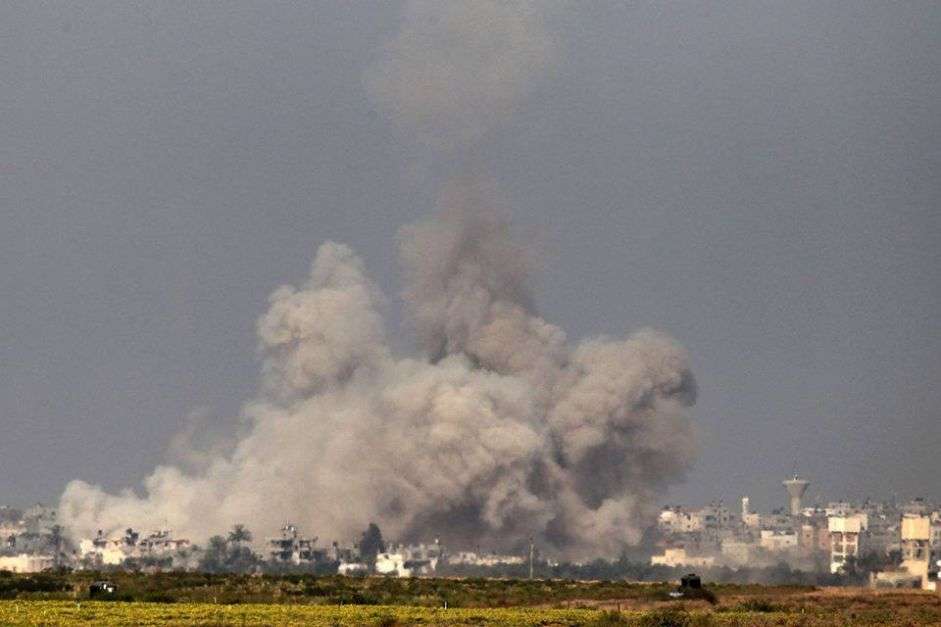 Geneva–Earlier this week, the residents of Rafah in the southern Gaza Strip fled their homes and took shelter in UNRWA schools to survive the Israeli offensive that has raged since July 8. Today and during the few hours of a humanitarian truce, they rushed back to check their destroyed houses and the remnants of their memories and belongings scattered under the massive rubble. They never thought death would result

It happened shortly after 8 a.m., less than an hour after a fragile humanitarian truce went into effect. The Israeli army committed a massacre by targeting thousands of Palestinian residents in the streets. The residents were targeted indiscriminately and violently with dozens of missiles and artillery shells. They hit the city market, killing 110 people and injuring 200 others, according to preliminary evidence. At this writing, there are bodies still lying in the streets, which paramedics have not been able to recover.

As in previous massacres, Israeli forces deliberately targeted medical crews who rushed to the scene to recover the bodies and rescue the wounded, killing three paramedics. When the wounded and the dead finally arrived at Abu Yousef Al Najjar Hospital in the Jnainah neighbourhood, the entrance to the hospital came under heavy shelling. The Palestinian Health Ministry described the incident as a massacre and a war crime.

A Palestinian medical source reported on Friday evening that the patients and medical staff were being evacuated from the hospital due to the heavy bombardment and shelling of the area surrounding the hospital, making it very dangerous.

Meanwhile, the few hours of relative quiet elsewhere revealed the size of previous massacres in the Shujaeya (Gaza City) and Khuza'a (east of Khan Younis) neighborhoods. More than 40 bodies were recovered, mostly in Khuza'a.

Eyewitnesses in Khuza'a told a
Euro-Med Monitor for Human Rights team that some residents who went back to check on their houses more than a week after fleeing from heavy bombardment were executed en masse. The witnesses reported seeing bodies stacked atop each other inside the bathroom of one of the houses.

Medical sources also reported being targeted by Israeli army snipers while attempting to recover the bodies.

In Shujaeya, the
Euro-Med Monitor team found dozens of houses reduced to rubble by the heavy bombardment of the area, and many others partially destroyed. Shujaeya looked as if an earthquake or other massive natural disaster had struck.

The Euro-Mediterranean Human Rights Monitor has collected preliminary statistics for the outcome of the Israeli assault on the besieged Gaza Strip as of midnight on the 25th day of the Israeli offensive. A total of 152 people (17 children and 11 women) were killed on Aug. 3 alone, bringing the death toll to 1,592, including 346 children and 192 women.

Due to the heavy bombardment of the Gaza Strip, which has intensified considerably in recent days, 544 people were wounded Aug. 3, bringing the number of people wounded since the beginning of the assault to 8,668, including 2,590 children and 1,726 women.

To date, the Israeli army conducted 57,936 attacks in Gaza, including 6,828 airstrikes, 15,407 assaults from naval vessels and 35,701 artillery shillings by ground troops.

The Israeli armed forces also are increasingly targeting houses and civil or religious facilities. As of Friday, 9,528 houses have been hit, including 1,580 that are completely destroyed and 7,948 that have been partially damaged. As of Friday evening, more than 410,000 people have been displaced as a result. Nearly half of them fled to schools run by UNRWA, which also have been struck, and the rest are staying with friends, relatives and elsewhere – sometimes as many as six families to one house.

Israeli warplanes have targeted 108 mosques, 31 of which were completely destroyed. Hospitals also have not been immune. On Friday, the Israeli army fired a number of shells at Abu Yousef Al Najjar Hospital in Rafah, causing partial damage to the facility and brining the number of hospitals targeted since the beginning of the aggression to 21. In total, 29 other health facilities/mobile units have been struck, including 13 hospitals -- three of which were shut down and the rest significantly damaged, seven primary health care clinics and nine ambulances.

Neither have UNRWA facilities been spared. Since the beginning of the assault, seven UN schools have been directly targeted, killing and wounding dozens of people, in addition to more than 100 other educational institutions.

The massacres are exacerbating the disastrous living and economic conditions in the Gaza Strip caused by the eight-year Israeli blockade. The Euro-Med Monitor team documented the destruction of 243 commercial and industrial facilities, causing substantial economic losses estimated at $1.5 billion, including $1.2 billion in direct losses.

The grave economic situation results from the disruption of work in factories, leading to the loss of employee salaries and a high unemployment rate that was already far above the norm. A worsening fuel shortage – caused in part by damage to Gaza’s only power plant -- impacts all aspects of life, since fuel is required to operate most facilities. Residents of Gaza City have access to electricity for about two hours every three days, whereas those in the central area of the Strip have no access to electricity at all. In addition, 85 percent of the cellular communications network has been disrupted, and the network may fully stop functioning soon if the fuel crisis is not resolved.

There is no excuse that can justify the premeditated killing of civilians and the bombing of their houses in such a wide-scale manner. What is happening is a massacre and a war crime that violate the most basic human, moral and legal norms.

It is clear that Israel is inflicting collective punishment on the civilians in the Gaza Strip. The United Nations and its affiliates, particularly the Security Council, must promptly take effective actions against Israel, including the prosecution of those responsible for such inhuman acts.