A child or a woman is killed every hour in Gaza 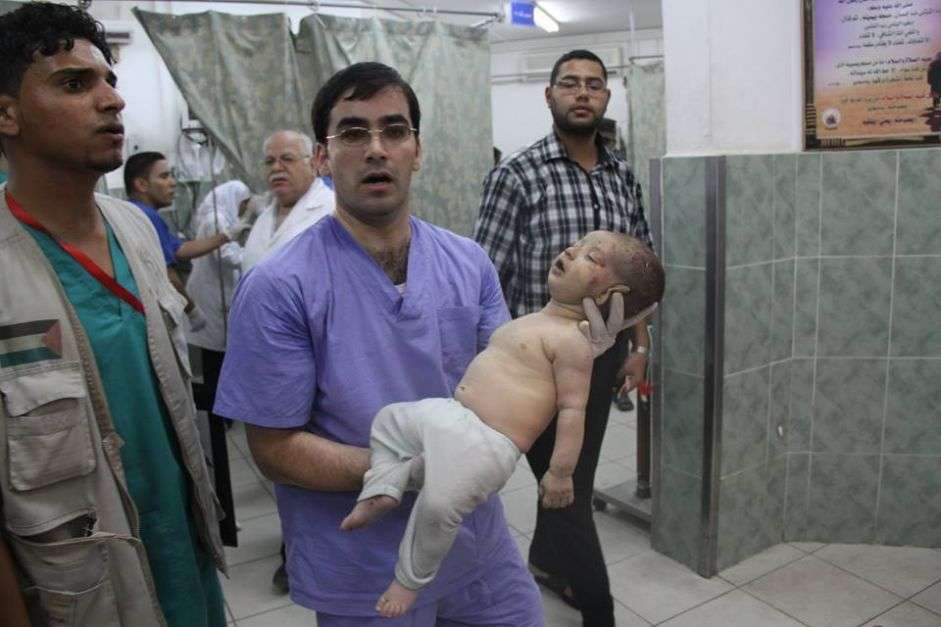 Geneva – By the midnight of the twenty-sixth day of the Israeli assault on the Gaza Strip, the number of people killed has reached up to 1,710, nearly one-third of them are children and women. According to the Euro-Mediterranean Human Rights Monitor, a child or a woman is killed every hour since the beginning of the assault.

Not only that the Israeli army dropped tens of missiles and shells at Rafah throughout Friday, killing more than 110 civilians and wounding more than two hundred, it also continued pounding the city indiscriminately for the second day in a row and exterminated entire families. Among the Palestinians killed in Rafah yesterday in airstrikes were seven members of Abu Salman family in Tel al-Sultan neighbourhood, and another seven members of Sha'er family. The mass murders of civilians in Rafah also targeted Zo'urob family. In addition to that, 23 civilians were also killed when the Saudi neighbourhood was bombed and shelled, causing huge damage to the infrastructure, houses and commercial facilities in the city that is adjacent to the border with Egypt. Residents reported that some of the bodies are still buried under the rubble.

Euro-Mediterranean Human Rights Monitor has issued preliminary statistics for the outcome of the Israeli assault on the besieged Gaza Strip. By Saturday midnight, 1,710 people have been killed, including 391 children and 255 women. Due to the heavy bombardment of the Gaza Strip, which has intensified considerably in recent days, 9,077 people have been injured, including 2,767 children and 1,814 women.

In addition to that, places of worship have been also targeted. With the ongoing offensive, the Israeli forces have been deliberately targeting mosques. According to Euro-Mediterranean Human Rights Monitor, the Israeli warplanes have targeted 13 mosques; six of which have been completely destroyed, and the others partially damaged. Hence, this brings the number of mosques that have been targeted since the beginning of the offensive to 118 mosques, 31 of which have been completely destroyed.

In the early hours of Saturday morning, Israeli F16 warplanes hit the administration block of Gaza City's Islamic University with two missiles, causing huge damage to the building, and thus raising the number of universities that have been targeted since the start of the assault to six. The Palestinian Health Ministry said that since the beginning of the assault it was forced to shut down 44 primary health care centers out of 55 centres, as well as dozens of other health centres due to the direct bombardment and the inability of residents to reach such centres.

The massacres and the bombardment come amidst the catastrophic living and economic conditions in the Gaza Strip. Euro-Mediterranean Human Rights Monitor has documented the full destruction of 243 commercial and industrial facilities, which has caused substantial economic losses to the Palestinians estimated at 800 million dollars, including 478 million dollars as direct losses.

Moreover and since the beginning of the assault on Gaza, the Israeli forces have targeted more than eight water and sanitation stations providing services to more than 700,000 civilians, as well as the damaging 167 schools.

Euro-Mediterranean Human Rights Monitor confirms that thousands of Palestinians have been forced to flee their homes due to the ongoing and the indiscriminate Israeli artillery shelling of the border areas. By Saturday evening, more than 475,000 people have been displaced as a result of their houses being bombed and blown up by Israeli airstrikes. Nearly half of them have fled to dozens of schools run by UNRWA. Unfortunately, schools run by UNRWA have not been much safer either, as two of them have been targeted directly, killing and injuring dozens of refugees. Since the beginning of the ground operation, the Gaza Strip has been under heavy and random attacks by warplanes, warships, and artillery shells that target mainly civilian homes.